Me and abstract art have never really got along. Sure, I like some colours, and some arrangements of lines and shapes. It’s easy to like a Rothko, say. But I know that’s not really it. When faced with an abstract that’s not particularly eye-pleasing, I’m not sure how to respond. There’s something clever going on and I’m not in on it. That makes me tetchy. I expect a lot of people feel the same, and it’s why they say they don’t like modern art.

These mixed feelings surfaced recently when I took part in a project between the writers’ organisation 26 and Eames Fine Art.  And once again, as in so many areas of life, copywriting came to the rescue.

The 26 Prints project involved pairing up a writer with a print, generously lent by Vincent and Rebecca Eames from their gallery in Bermondsey Street, London. Each writer drew a number from a hat, and was presented with the corresponding print on the gallery walls. We took our print home for a month, and wrote a sestude in response to it (a sestude is 26’s own invention – a poem of 62 words, ie 26 backwards). The prints and their accompanying sestudes were then to be hung in an exhibition at the Eames Gallery.

And what prints. Picasso, Rembrandt, Warhol, Matisse, Goya, Dürer…  these and other towering figures of art were wrapped up for us in big silver envelopes, and we duly lugged them home. Astonishing! 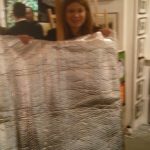 I was paired with a print by Victor Pasmore – possibly the most important British artist you’ve never heard of. I hadn’t. Here he is in his silver sleeping bag: he took up a whole seat on a train packed with commuters, none of whom knew they were in the presence of mid-century Brit-Art greatness. 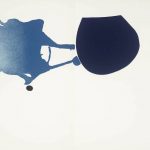 Victor Pasmore, The Image in Search of Itself XII, 1971.

And here’s the print – the twelfth in a series of sixteen, all titled The Image In Search of Itself. The only image it brought to mind was a TV news report from the 1970s. The shape on the left looked like a silhouette of journalists and their sound equipment. Not thrust at a newly-returned astronaut, or under Richard Nixon’s nose, but at a toilet lid. The first time I saw it, I felt the fear, swiftly followed by the tetchiness. Oi, Pasmore, you ‘avin’ a larf?

Abstract art does the opposite of my job as a copywriter. Where I seek to engage and inform – in, let’s face it, an inveigling way – abstract art is aloof. If it was a gesture, it’d be a Gallic shrug.  But I had to engage with this image, and write a poem about it. Which would be typeset, at considerable expense, and displayed in a leading London art gallery.

I decided to approach it as I would a client project. As a copywriter, you encounter the scarily unfamiliar every day. It’s your job to get inside the heads of people who, say, explore for oil. Sell buildings. Give grants to farmers. Buy crayons. Work in a factory. Help blind people. Invent payment systems. Start businesses in anything from medical diagnostics to ballroom dancing. To do it at all, you’ve got to have confidence in your cold reading skills. You’ve got to believe there’s nothing you can’t communicate.

Every project begins in a swirl of unknowing. In a kind of sedentary-lifestyle survival response, you grab at any useful information and stock up your brain as fast as you can. The more you find out, the more you warm to your subject. And that’s when the switch happens. There comes a point where you’re on the client’s or subject’s wavelength, and understand what they want and why. There’s no ‘right’ wavelength – you just have to find something on a more heightened level that you can work with.  It will guide everything you do, from structure to word choice.

That’s my method anyway. So I googled the living daylights out of Pasmore, abstract art, and British literary trends of the 1950s and 60s. I got a sense of the post-war ‘crisis of modern painting’. Artists felt it was their role to keep innovating, in the disruptive way of the modernists before them; but with all the traditional styles now overthrown, there was nothing for contemporary iconoclasts to reject. The only route left was pure abstraction, and exploration of the act of creating itself.

A quote from the Cubist painter Juan Gris lodged in my mind. ‘An object can be looked at in innumerable ways. For a painter it will be simply a grouping of flat, coloured forms.’

This was a counsel of despair I could relate to. The switch!

Now it was just a question of finding a suitable poetic form.  Or in copywriting terms, tone of voice.

Pasmore himself was an artist in search of a form. Born in 1908, he worked his way through styles in vogue at the time: impressionism, cubism, fauvism. In the late 1930s he turned to painting conventional landscapes. This was probably the most commercially successful stage of his career, but from 1947 on he devoted himself to pure abstraction.

In the 1970s, when Pasmore was working on The Image in Search of Itself series, writers, poets and songwriters were experimenting with cut-up techniques – slicing up text, and creating fresh ideas from the random connections. Dadaists did this by pulling words out of a hat, and I thought that tied in nicely with our 26 way of bringing pairs together. 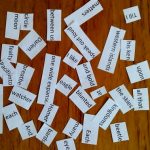 So I immersed myself in The Image In Search of Itself, jotted down images and thoughts that came into my head, and loosely formed them into a poem. Themes of exploration and discovery, strangeness and wonder came to mind – which led me to the Keats poem, On First Looking Into Chapman’s Homer. So that went for the chop, as did my own effort. Then it was simply a question of mixing the words up in a hat, and having fun with the resulting bricolage.

Except mostly it wasn’t fun. It was a struggle to do justice to what I wanted to get across, in the spirit of Keats and Pasmore. And that was, a sense of the breadth of life and time in the universe; and the astonishment when shapes in space encounter each other for the first time. That was what I wanted. What I got was sixth-form cringe. There were a lot of junked lines along the way. But deadlines have a way of making you push on, even if it is through gritted teeth. Another lesson learnt from copywriting.

It occurred to me that one of the reasons Keats was a better poet than me was that his words when cut up still had coherence and musicality, whereas mine sounded clumsy and lopsided. ‘Lunar module’, ‘rhinoceros’, ‘stag beetle’ and ‘inquisitors’ do not have the grace of ‘pure serene’, ‘his demesne’ or ‘silent, upon a peak in Darien’. But put the lumpy and the smooth together, and they respond to something in Pasmore’s image. As well as giving me a bit of a rhyme structure to hang the poem on.

That’s a copywriting thing too. It’s not really about being a wordsmith. Authenticity is more convincing than verbal fireworks, or marketing gush. Use what your research and writerly instincts tell you, and you’ll come up with something original and true to life.

The notebook by the bed

Several times I nearly threw the whole experiment out. But it wouldn’t let me. I’d wake up in the middle of the night thinking of lines and rearranging them. Which also happens when I’m searching for the perfect headline. Finally I arrived at something that satisfied me, and felt like an honest response to what I was seeing and feeling.

The disjointed, make-of-it-what-you-will spirit of The Image in Search of Itself now seems to me, far from arrogant, a moving attempt to express something wonderful, fragile, and inexpressible.

Imperfect watcher, stout Cortez
Asking his inquisitors
Did I never
Have I travelled
Have I been

The goodly maker drives the ink
With bold surmise
Let edges find themselves.
So much depends upon